WASHINGTON, D.C. — The war of words between two powerful Republicans has heated to a boiling point. This morning President Donald Trump assailed Senator Bob Corker of Tennessee on Twitter. Corker had been quoted in a recent interview criticizing Trump and wishing for him to stay out of the negotiations on tax reform. 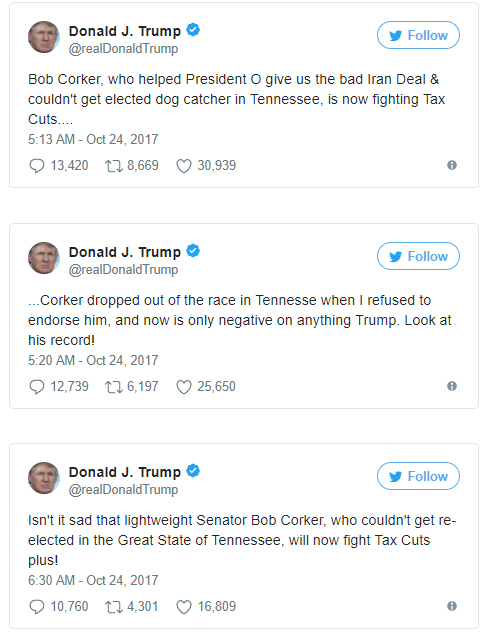 After the first three tweets were sent, the battle wasn’t finished. Corker tweeted a swipe at Trump.

Trump then followed up with two more attacks on Corker.

Senator Corker was a supporter of Trump’s in the 2016 election but this morning he said he would not repeat his endorsement if he had it to do all over again. Later in the day, Corker was found in the congressional cafeteria enjoying a grilled cheese sandwich. He was asked for clarification and, perhaps because he has already announced he will not seek re-election, Corker was extremely candid.

“When I endorsed him we were in the fight of our lives to stop the presidency from falling into the hands of a fully capable, fully-qualified female,” Corker explained to reporters, “and so endorsing him wasn’t that big a deal back then.”

But, Corker says, since he’s been sworn in, Trump has been “such an unmitigated shit show of a disaster” that the bloom is off the rose for Corker and Trump, but even more specifically, the Tennessee Republican says he’s no longer a “fan of the taste of Trump’s dick.”

“At first, I enjoyed sucking his dick, complimenting him, making him feel good about himself,” Corker said, “because it’s been so long since I sucked a Republican president’s dick. But, if I’m being honest, this Republican’s dick didn’t taste like the last guy’s.”

“Like, the last guy was at least smart enough to not attack Muslims in general, even after 9/11,” Corker said. “And that to me shows that even though he was a moron and war monger, he still got how we Republicans play the game. For years we’ve courted racists without being overtly racist. It’s a great strategy for us, and has been since the Civil Rights era. We convince racists to vote for us, they vote for us, and then we pretend to be offended by racism. Trump has blown all that to shit by just being an overtly racist jerk to black athletes and commentators.”

RELATED: Trump Rushed To Hospital To Remove Myeshia Johnson’s Foot From His Rectum

The failure to repeal Obamacare, the failure to implement a reasonable travel restriction that will pass constitutional muster, and several other moments of failure for the Trump administration have started to reflect poorly on the rest of the party, Corker says. That is another reason he doesn’t like how Trump’s phallus tastes anymore.

“It’s no fun sucking someone’s dick,” Corker said, “if you’re just going to get sucker punched while it’s still in your mouth. Doesn’t he realize that could get his dick bitten off? I mean, I’m in a position to push for impeachment. But dude doesn’t care about anything other than himself.”

Ultimately, Corker says he hopes that with just a few months left in his Senate career, that he can convince Trump to change his ways, or at the very least dip his penis in some kind of better tasting substance.

“Maybe he can coat his dick in the tears of children who are starving and can’t eat because we gutted welfare together,” Corker suggested, “I know as a Republican I’ve always thought the tangy zip of poor people’s tears can really kick up any dick I’m putting in my mouth to get closer to power.”

The White House did not respond to requests for comment.