NEW YORK, NEW YORK — The president’s son will be undergoing a radical, experimental new plastic surgery procedure, and the hope is that when it’s completed his face will look, according to doctors, “a lot less like someone just jizzed in it without his permission.”

“Very rarely have we seen someone with CJF this badly,” Dr. Henrietta McGee told us.

Awkward! Donald Trump Jr. Asked His Dad Who He Has to “Blow to Get a Killer Office Like Ivanka”

Dr. McGee said it’s quite remarkable that more people don’t “go running and screaming” from the president’s son because in her experience CJF puts people off. The doctor said she’s performed plastic surgery on burn victims who were found face down in the flames and they had “better looking features to start out with than Donny Junior does.” She said that Trump, Jr. is “so disgusting on the outside, you almost forget how disgusting he is on the outside.”

“Then he tweets,” Dr. McGee said, “and you realize that he’s probably even uglier deep down, where most people’s souls are. I mean, you know, if souls were things medical doctors like me, a totally real doctor and not a made-up one in a satirical news item meant solely to mock Donald Trump, Jr. because he’s such a vile, contemptible piece of shit that the normal rules of decorum are righteously thrown out when dealing with him, because again, he’s just such a moronic, out of touch, rich, white, arrogant fuck boy…medically speaking.”

It’s unclear at this time, McGee says, whether the new procedure will have any positive impact on the president’s son’s face, but she said “doctors have to try to do something, anything.” 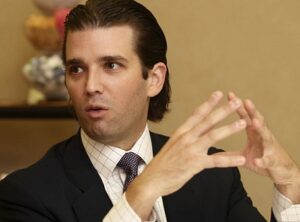 “I mean, just look at him,” McGee told our reporters, “in every single picture you see of him, he has that same, distant, vacant stare. At first someone suggested he might have CFF, chronic fart face, where you always look like you’re squeaking out a stinker, medically speaking. But after several tests, we confirmed that what’s really happening is it looks like every single picture is taken right before someone drops a hot load on Junior’s face.”

The surgery is slated for sometime later this year. No one from the White House returned a request for comment.