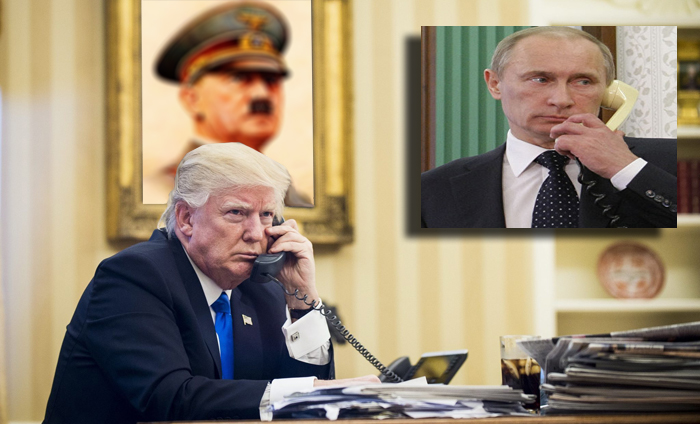 MOSCOW, RUSSIA — Russian/American President Vladimir Putin (R-Kremlin) is said to be extremely irate these days, after reviewing several recent tweets sent by one of his junior employees.

“Someone get that fat orange piss lover on the horn pronto,” Putin was heard screaming at his staff in Russian this morning. “I need to speak to him right away about all these damn Crooked Hillary tweets.”

Putin was referencing the fact that over the last couple of weeks, Alleged President Donald J. Trump has been using Twitter to assail the FBI and attack the institution for not indicting former Secretary of State Hillary Clinton. It’s unclear what crimes he’d like to have Clinton punished for, but in one string of tweets sent on August 25th, Trump seemed to really focus his ire on the woman he just barely beat out, thanks to a participation trophy referred to in the Constitution as “the Electoral College.”

“Is it just me, or is Donny Pee Pee Boy putting Hillary in his mouth way more than me these days,” Putin asked rhetorically. “I told that tubby sack of shit that I was to be in his mouth more than anyone else if our little urine soaked deal was going to go through. He better not be going back on the deal!”

President Putin is said to be on the brink of considering “other options” for the 2020 election.

“Can’t that bloated sack of orange shit go a day without mentioning her? Why did we help him win if it’s going to be all, ‘Hillary, Hillary, Hillary!’ all the time? He better not think he’s a shoe-in for 2020,” Putin said. “He keeps this shit up, and I’ll put Steven Seagal in his place. He’s just as qualified as Donny.”

The White House did not comment on this story, as they were too busy groveling for forgiveness.