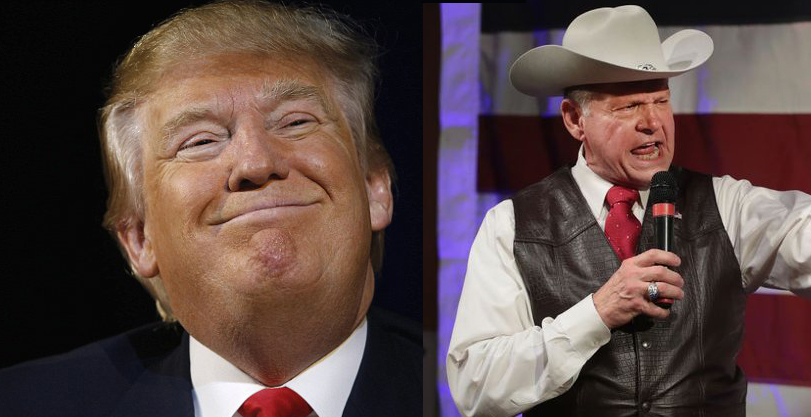 WASHINGTON, D.C. — Back in the nation’s capital after flying to Pensacola, Florida for a “Make America Great Again” rally, President Donald Trump once again endorsed Judge Roy Moore in the Alabama special election for Attorney General Jeff Sessions’ former seat in the U.S. Senate. During last night’s rally, Trump gave a loud, ringing endorsement for the judge, and even took the rather unusual step of attacking one of the several women who have come forward to accuse Moore of making sexual advances toward them when they were young teenage girls and he was in his twenties and thirties.

As reported in The Washington Post, Trump assailed a woman who said that Moore wrote an inscription in her 1977 yearbook and then updated her story to admit she added some notation to the inscription, but that the bulk of the note, and Moore’s signature, were authentic.

Whoa. Well, I have to say this; look, I have to. We have to be fair. So did you see what happened today? You know the yearbook? Did you see that? There was a little mistake made. She started writing things in the yearbook. Oh, what are we going to do? Gloria Allred — anytime you see her, you know something’s going wrong. (Washington Post)

“Folks, I just want to remind real Americans — and by real Americans we all know what I mean…white, I mean white, just so we’re clear,” Trump began, “Electing Roy Moore is literally the only option you have, if you live in Alabama and you want tax cuts for me, my family, and our rich friends more than you want clean air, clean water, healthcare, and working infrastructure.”

Mr. Trump insisted that anyone worried about Moore attempting to institute regressive policies is “making Mountain Dew out of a mole hole.”

“Anyone worried about Roy Moore messing with America just doesn’t know Roy Moore,” Trump said. “America is over 240 years old. That’s at least 226 years too old for Moore. Hell, even I don’t grab a puss older than 45 myself.”