WASHINGTON, D.C. — This morning, President Donald Trump sent a series of tweets that at first made the world think he was a victim of sexual assault, but in the end wound-up admitting to being a sexual predator. The confusion started when Trump simply tweeted #MeToo, without any other context or information until he sent subsequent tweets.


The #MeToo hashtag was started over the weekend by women wanting to show solidarity and support, as well as draw attention to the scope and magnitude of how much sexual harassment and misconduct they are subjected to. The hashtag sprung up in response to the Harvey Weinstein scandal that erupted in Hollywood last week. 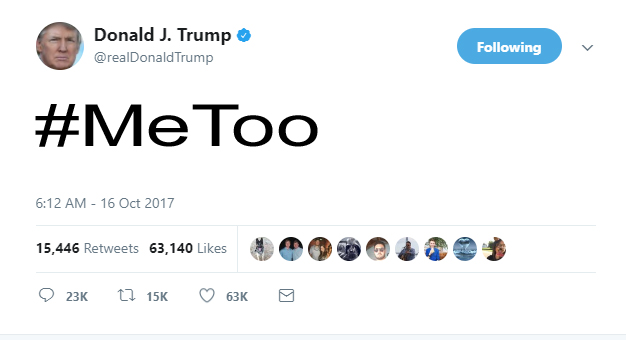 Immediately after the tweet was sent, responses flooded in. Some were shocked that Trump seemed to be showing solidarity for a left-leaning, progressive hashtag. Others were surprised to find out that Trump seemed to be coming forward and opening up about being sexually harassed, abused, or assaulted himself. Perhaps because of those reactions, Trump would tweet again later, trying to clarify his position.

But this tweet only seemed to confuse matters more. Critics on both the left and the right wondered if Trump was saying he doesn’t believe in speaking out against sexual assault or any kind of sexual misconduct. Trump quickly tweeted again.

Now it seemed very apparent that Trump initially thought he was admitting to having committed inappropriate sexual conduct. But Trump still had a couple more tweets to send before he was satisfied with himself.

A few hours after the last tweet had been sent, Press Secretary Sarah Huckabee Sanders stopped practicing her awful open mic material she does at press briefings long enough to address Trump’s statements.

“The president’s tweets speak for themselves,” Sanders said, “and frankly I’m insulted that you’d even ask me about them. What, you think just because he’s the president it’s newsworthy when he tweets stuff, even if that stuff is stupid or seems to suggest he knows he’s a sexual predator? The American people know that’s why you’re all fake news.”

Last week, a woman who has accused President Trump of groping her and is suing him over those allegations had her attorney subpoena any and all documents related to “any woman alleging that Donald J. Trump touched her inappropriately,” from his presidential campaign. Huckabee-Sanders dismissed that story as “nothing but liberal lamestream media hot air.”