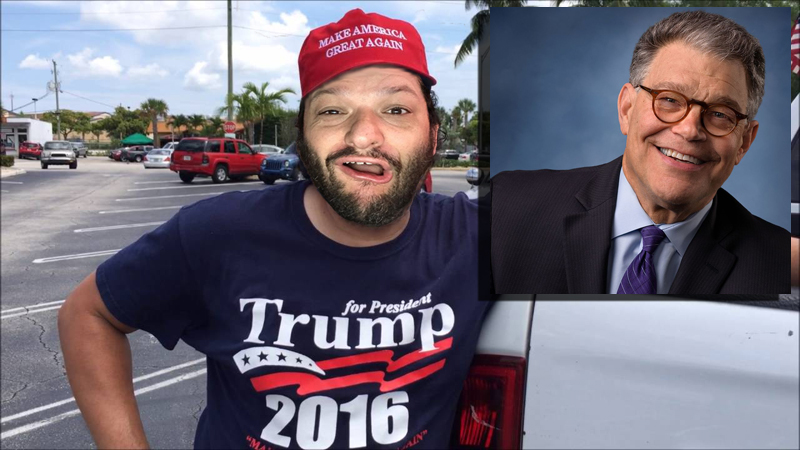 COLD CAVE HILLS, TENNESSEE — Right-wing activist and podcaster Jethro Bohiggins has never voted for a Democrat for any office. He is a lifelong, card carrying member of the Republican Party.

“And I do mean lifelong,” Jethro told his podcast audience this morning, “because my grandpappy-uncle Skeeter paid my first year’s membership dues to the Republican Party the day I was born.”

For years, Jethro has been convinced that the Republican Party is all that stands in between society’s complete and utter moral decay. He says that the Religious Right has attached itself to the GOP “for a good reason.”

“And that reason is because Republicans champion the good, the clean, upstanding, the moral right,” Bohiggins said. “They’re not out there groping women. In fact, they are so committed to Biblical marriage and morality that some of them even try to make babies with 14 year old girls just like God did in the nativity story.”

Even as much as he has always outright hated the Democratic Party, Mr. Bohiggins admitted that he did respect Senator Al Franken’s decision to resign. He said that even though some of the allegations didn’t add up that he still gained “a tiny little smidgen of respect” for Franken.

“Once I was looking up another inch or two at the Democrats on their moral high ground, it really made me question all my beliefs,” Jethro told his podcast audience. “Of course it weren’t more than two or three nanoseconds later that I said, ‘Fuck it, he’s a Democrap, I don’t care, this is awesome.'”

Bohiggins says that while on the whole Franken’s resignation hasn’t made him see things differently, it did give him a slight pause to consider perhaps voting for one in the future.

“I mean, I still hate liberals, think abortion is literally murdering a baby, that Mexicans are all evil, Muslims too, and I hate the environment so much I litter all the time,” Bohiggins said. “So there’s still all that. But if you show me a Democratic candidate that has all those beliefs, and after Franken resigning, I’d give them about .25% more consideration than your average libtarded cuckolded Dim-o-crap.”